Home > Education > The Halves And The Half Nots
Education

The Halves And The Half Nots 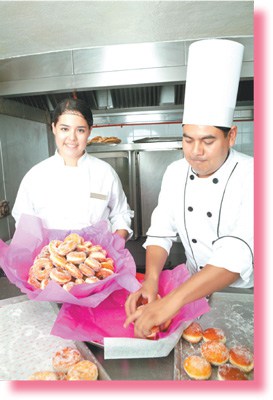 What in the world makes fractions so darned difficult for our students?  Sure, fractions can be intimidating, but I really don’t think they have to be.  Like so many other math issues, I think it’s about how the student is brought into the subject.

At some point in third or fourth grade his teacher is going to say, “Next week we will start on fractions!”  Cue the music: Dum-dum-duuuuuuuum!  His heart is struck with terror, because every one of his older friends and/or siblings has told him to dread fractions.  FRACTIONS!  Even the word is never spoken outside of math class!

What if, instead, you start introducing fractions in kindergarten and all the way through second grade, so that, when he starts in school his reaction will be, “Cool!  I like fractions!”  And he will, because he will know that fractions are all about doughnuts, cookies, and all kinds of things that come in dozens.

So to start, we never use terms like numerator or denominator.  Those are scary and mathematical.  Just start with “half,” and teach him that half means “two parts the same.”  Another way to talk about it is to say that half means being fair.  Break a cookie in two different sized pieces, and ask if that’s half.  Would it be fair to share it that way?  No?  Then, that’s not half.

Next, move on to half of two.  If we have two balloons, and we want to share them fairly, how many balloons do we each get?  One?  Okay, so half of two is one.  What would be half of six?  Ten?  We will get used to half of even numbers pretty quickly.

Now, you can move to odd numbers.  What’s half of three?  This may take some thought, or you may need to demonstrate.  Put three cookies between the two of you and say, “if you can find a way to share these cookies fairly, you can have half of them.”  Once he realizes that he can break one in half, count the whole cookies, and count the half, and he’ll see that half of three is one-and-a-half.  Of course, then move on to higher odd numbers.

But, what about the dozens?  Glad you asked!  Now is when we introduce the term fraction.  Get a dozen doughnuts, and have him decide how many you each get, if you share them equally.  “Okay, half of twelve is six, sure, but, what if we want Mom to get a fraction of the doughnuts, too?”  “Mom to get a what of the doughnuts?”  “Oh, I’m sorry, fraction is just a fancy way of saying part or portion.”

So, he figures out that you each get four doughnuts, so you say, “So, one third of twelve is four!”  “One third?”  “Yes, there are three equal parts, so we call those thirds.”  And, what if we want your sister to have a fraction of the doughnuts?  He correctly computes that you each get three, so you say, “A-ha! So, one fourth of twelve is three!”  Yes, one fourth is one of four equal parts.

How to Pay for College