Home > Education > Getting The Most of Practice: Part V
Education

Getting The Most of Practice: Part V

By Jeff Comas, Director of Knoxville Academy of Music 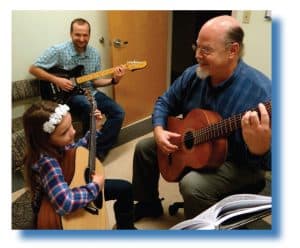 Tension and The Physicality of Performing

This article is about performing music, but the concepts can be applied to other activities like sports, dancing, acting, even writing or doing crafts.

In part one of this series I discussed letting the learning of music be easier by studying and music in small segments, which can be learned faster and with greater ease. In this section I’ll discuss more of the physical element of playing music.

Music students and even professional musicians (and people doing other activities too) are often guilty of holding unnecessary tension in the hands, arms, shoulders, neck, jaw and other areas. Over the years, if left unaddressed, this can become seriously damaging to the body and can lead to Repetitive Strain Injuries such as carpal tunnel syndrome.  There can be a variety of reasons for tension-filled playing; fear of mistakes, overuse of force & required tension, and poor performance posture are common culprits.

Truth be told, I had problems with these issues well into my professional playing career. When I went back to college to get my music degree I was in my late 20’s. Between practicing for school, playing gigs, and teaching lessons, I probably had a guitar in my hand eight hours per day. I had been experiencing some pain with practicing/playing and as I approached my junior year recital, I was practicing so much with bad habits that I became unable to play at all without severe pain.

Music students and professional musicians (among others) are often guilty of holding unnecessary tension in the hands, arms, shoulders, neck, jaw and other areas.

I was advised to stop playing until the pain subsided, and then to practice in periods of no more than 20 minutes with out a break. This was (and is) good advice and it got me through my junior recital pretty well. However, this was a turning point for me. I began a journey down a path to a better understanding how to play music (and do other activities) with greater ease and enjoyment. I want to share what I have learned so that you (or your child) will be less likely to suffer with unnecessary performance tension.

I will start you with one simple method to ease practice and performance tension and anxiety.

That’s it. Just keep breathing. Next time that hard part comes up notice to see if you are (or your child is) breathing, or holding your (his or her) breath. Allow yourself (remind your child) to breath. The oxygen feeds the muscles and the mind. Keep the flow steady and you will have better muscle control and clearer thinking.

Mistakes and fear of mistakes usually comes from a lack of clarity/confidence on the part of the performer. As discussed in Part I, clarity and confidence can be gained by; learning to imagine, in great detail, all that is required to play the music, practicing at a tempo slow enough to allow the student to play without mistakes, and learning the music in small parts and repeating correctly until they are easy. When one can clearly imagine the music (or whatever activity) and how to perform it, confidence is high, success is likely, and fear is reduced.

Over use of force is a common problem with developing musicians. I believe this is usually because perceptions and habits developed as beginning students. I’ll use an example about stringed/fretted instrumentalists, since that is what I know best. When guitar students first start playing guitar they perceive that it takes a lot of force to push & hold the string to the fret. This is mainly due to yet to be developed muscles, sensitive fingertips, and the unfamiliar feeling of the new requirements of the hand.

The result is often that the student feels they have to push the strings down as hard as they can. Over time the student becomes stronger and the fingers less sensitive, but pushing hard is what has become familiar. Only now the student is using more force than necessary. Solution- practicing backing off of the force until it is not quite enough, then adding just enough pressure back and practice playing with that much finger pressure. Keep trying until this becomes your new habit.

Do these things in your practice, I promise you will like the results.

Jeff Comas started playing music at 5 years of age. He is the Director of Knoxville Academy of Music. He has been a music educator since 1989, and has given over 40,000 music lessons.

To bee or not to bee: Allergic to insects?