The Law Of SAMEness 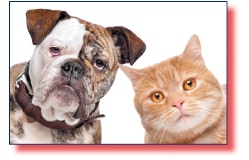 Last month we talked a bit about the beginnings of fractions, starting with halves, then moving stealthily into fractions (aka “portions” in that article).  But that was just a start, and eventually we have to get into the nitty-gritty, which includes some concepts and terminology that may not come that easily to every student.  But it should come a bit more easily to your student, because you have this month’s article!

It starts with what we call “the law of SAMEness.”  It’s simple, really.  The law of SAMEness simply states that we can only add and subtract things with the same name.  We can add two cats with two cats and we’ll have four cats.  But we can’t add two cats and two dogs to have four cogs.  No, we can only add two cats and two dogs if we give them the same name: two pets plus two pets are four pets.  Or animals.  Or mammals.  In fact, it can be any number of names, so long as the name applies to both of the things we are adding together.

Every thing has a quantity and a name, and fractions follow this basic rule.  The fraction two-fifths has a quantity, two, and a name, fifth.  This is why we can add two-fifths to one-fifth and have three-fifths.  Or, in math shorthand we would write 2/5 + 1/5 = 3/5.  So now for the fancy names: with fractions we call the quantity the numerator (think “NUMBERator”) and the name we call the denominator (think “the-NAME-enator”).  In fact, the Latin nom means name.  So, we simply write the quantity first (on the left or on top) and the name second (on the right or the bottom).

One more quick note on the name of the fraction.  The name is simply how many equal pieces make up one whole.  “Sixth” simply means that we’re dividing the whole into six equal parts.

(Do you mind a little rant here?  I mean, really.  Why do we make everything so difficult for ourselves?  That problem would be read “one-half plus one-fourth,” right?  Why not “one-second plus one-fourth?”  Wouldn’t that fit the rest of the thirds, fourths, fifths… pattern?  I may have to write an article on these little bothersome inconsistencies one day…)

No, we can only add two cats and two dogs if we give them the same name: two pets plus two pets are four pets.  Or animals.  Or mammals.

Try it on the figure above – shade in half of the candy bar and you’ll see that one half is the same as two-fourths.  Then shade in the other fourth and you’ll have three-fourths shaded in (leaving the last fourth for Eva, of course).

I know that changing names from one-half to two-fourths is relatively simple, while dealing with 1/3 and 1/5 might be a bit more challenging.  But we’ve run out of space, so maybe we can get into that the next time.  But maybe you’ll see that learning and teaching math is best done interactively, so we’ll just have to see if I can figure out how to make this clear in writing…

The Power of Healthy Role Models

Are your kids getting too much screen time?

The Independent Child: Tips On How To Teach Your Child To Be Self-Reliant