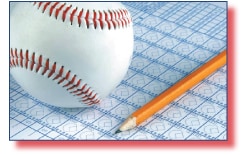 Spoiler alert: If you want to figure out the problem, cover up the last paragraph where I’ve put the solution!

I was trying to think about what to write this month, and came up with a big nuthin’.  Well, not exactly nothing, but nothing good.  Here was my first attempt:  “My grandmother was an entrepreneur and sold her pies, so it was quite natural that I should become an engineer.  Engineers use pi all the time.”  See what I mean?  Nothing good.

So then I thought about the KP theme this month about getting active.  My first thought was baseball (‘tis the season, eh?) and how cool it is with all the stats and all.  That got me thinking about a Smokies game I went to last year.  One batter came to the plate and the scoreboard said he had a .500 average.  That’s way too amazing to be plausible, so I figured he was just starting his career.  He got a hit.  On his next at-bat the scoreboard said he had an average of .667.  Aha!  I deduced that he had had two at-bats in his first game, because the only way to get from .500 to .667 in a single at-bat is to go from 1 out of 2 to 2 out of 3.  Wait a minute.  If I can figure that out for this batter, can I figure it out in general?

Now I’m thinking “this is going to be an AWESOME column this month!”  I went to work to figure out how to be able to calculate the number of at-bats based on the before and after averages of one turn at the plate.  After ten or fifteen minutes of pencil and paper and a slog through the quadratic formula I had found that if you simply divide one minus the new average by the change in the average you’ve got what you wanted.  Unfortunately, I could think of absolutely no reason anyone but a major nerd would care about that.

My first thought was baseball (‘tis the season, eh?) and how cool it is with all the stats and all.  That got me thinking about a Smokies game I went to last year.

But that brought me to the idea that a high school student could see how a quadratic function could be used in “real life!”  Yeah, right.  That’ll get ‘em excited about algebra.  So I nearly gave up, but decided that instead of some grand insight about math on this last issue of the school year I would leave you (and your high-schooler) a proof that’s not a proof.  I’m going to show, mathematically, that 2 = 1:

So here’s your assignment over the summer.  Tell me why this proof doesn’t really work.  It all looks really good, but there’s a problem with it.  You know that there must be a problem, because you know that two does not equal one!  (Insert brilliant insight about not being fooled by good-looking logic or something.) And if you can’t stand it anymore, here you go:

The blessing of fatherhood

The gift of discipline

What’s Love Got To Do With It