A mistake can be an opportunity 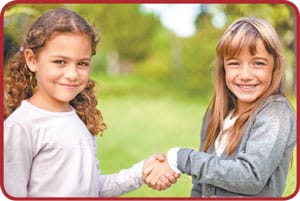 All parents dread it: the call from the principal because your child did something hurtful to another child. I got such a call recently. One of my sons, along with two other boys, had called another boy a name in the cafeteria. My son and the two other boys were sent to the principal who talked to them about what had happened. My son knew that the principal would be calling me.
The call came when I was at work. The principal told me what had happened, and let me know that my son seemed genuinely remorseful for his actions. Because I still had clients to see, I did not think about it again until I got in the car to go pick up my son from school. As I started to think “How am I going to address this situation with my son?” a memory from my own childhood spontaneously came to mind.

I was in the fourth grade, and for reasons I cannot recall, I had written a very mean poem about a boy in my class. I made the mistake of giving the poem to him. He gave it to our teacher who passed it to our principal.  The principal came to my classroom to confront me about the poem, and my mom was called and informed of the incident. I remember the shame I felt when confronted by the principal and, later, by my mother. I don’t recall the specific punishment I received, or whether I apologized to the boy I had hurt. The main thing I remember was the burning sense of shame. This kind of shame tells us that we are “bad” and can be distinguished from healthy guilt which signals that we are guilty of wrongdoing and may need to take steps to repair the harm done.

“All of us make mistakes, but only some of us learned as children that our mistakes that hurt others can often be repaired. ”

This memory from my childhood was a gift because it helped me talk with my child. I could use my own experience to shape my response. I realized it would be important to neutralize his sense of shame, help him get in touch with his sense of guilt, and then come up with a way to make reparation. My son needed to know that everyone, including his mother, is capable of hurting others, but that steps can be taken to repair the damage and restore the relationship.

When my son saw me arrive at the school, he hung his head in shame. I knew he had been dreading my arrival. The first thing I said was “Don’t think you are the only one in this family who has ever been called to the principal’s office.” When I told my son the story of what I had done in the fourth grade, his eyes got very big: I certainly had his attention!  Hearing that I, too, had been guilty of hurting someone helped him feel understood and helped dissipate his shame.

My son and I discussed his actions, focusing on the feelings of the child who had been hurt. He acknowledged that he would not like it if he was called a name. My son had already apologized to the child, in accordance with his teacher’s request. We talked about what else he could do to express his remorse and soothe the hurt child’s feelings. He decided to make an illustrated card to give the child. When I saw my son after school the next day, he told me the boy smiled and thanked him when he gave him the card, and this made my son feel so much better.

All of us make mistakes, but only some of us learned as children that our mistakes that hurt others can often be repaired. As parents, we have an opportunity to teach our children that when they make mistakes, they are not “bad,” but human, and that there is an important distinction between shame and healthy guilt. Most importantly, we can show our children the steps involved in reparation and point out the good feelings that come from successful reconciliation.

Kathryn Rea Smith, Ph.D. is a private practice psychologist specializing in assessment. She is the married mother of two school-aged boys.

Helping Children With The Hospital Experience