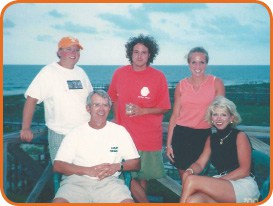 I am the proud father of two sons and a daughter, all born within a four year span.  They are all grown and married now, with children of their own.  Between watching them, and observing the children that I see in my orthodontic practice, I’ve had many opportunities to see younger generations develop.

When asked to write this article about “my experiences in parenting,” I took the opportunity to call my daughter and one of my sons to ask them what they perceived that I did “right” as a parent to positively influence them.  Our daughter wasted no time in telling me that one of the things that meant the most to her was that I always made it to her softball games, or the football or basketball games when she was a cheerleader.  No matter where the games where, I showed up  (maybe late) and she said she was always comforted and proud that I had made that effort after a long day at work.  She reminded me of the time I was at a meeting in Asheville, NC the night of the homecoming game her senior year, and she was a nominee for Homecoming Queen.  I surprised her and drove back that night to be at the game and see her crowned as queen, and then I drove back to Asheville after the game that same night.  She thought I wasn’t going to be able to attend the game, and she told me it “made her night” when she looked up and saw me standing at the fence.

Her telling me that now proved to me that what my wife always tells me is indeed true…that just being there for your children is the ultimate gift you can give them.  It sticks with them much more than the money you spend on clothes, or trips, or things.  All those expenditures don’t hold a candle to just making them feel loved, valued, and a priority in your life.  Tell them you love them…you can’t say it enough.

Whenever my wife and I talk to our children, we end the conversation by telling them “I love you” and they tell us they love us too.  My wife comes from a large family where chaos and drama reigned, but so did the open expression of love.  I grew up in a family where “I love you” was not openly expressed, so it was initially hard for me to say “I love you” so freely.  But I got over that quickly, and it sure does feel good to say it now, and to hear my children say it in return.  Doesn’t get much better than that.

“Being a parent and being a child are both evolving skills.  But if you can establish an environment where both sides are working toward good things, and there’s love and caring underlying all that you do, then your chances for success are greatly enhanced.”

I then spoke with one of my sons and asked him the same question….what did I do as a parent that positively influenced and guided you?  His response was that I worked hard and modeled a good work ethic, and that he knew he was expected to do the same.  He also pointed out that my wife and I each have our individual strengths and weaknesses, and that we worked together as parents to use each of our strengths as much as possible.  And again, he went back to the times we spent together as a family, and the importance we put on supporting them in whatever they were doing.

As the oldest of 6 children, my wife came into our marriage with much more “family” experience that I did, as I only had one older sister.  She has always told me that as parents, we are in the “memory-making” business.  The things that we do for and with our children are constantly creating memories for them, and we need to take that responsibility seriously and make those memories as positive as we can.  She has always maintained that these “memory moments” don’t necessarily revolve around expensive vacations, or even cost that much money.  Times that we as parents spend with our children, that we may not even remember, are often the things that our children hold dear.  As parents, we often “go through the motions” of doing things with our children, and frequently get caught up in just surviving our busy days of work, family, finances, etc.  But it’s amazing how our children will remember something that we considered inconsequential as one of the highlights of their childhood.

One memory-maker that my wife has always felt strongly about is the creation of family traditions.  For our family, an important one is Christmas morning brunch.  My wife grew up with this tradition and she instituted it in our family.  Now that my children are grown and have families of their own, it is one of their favorite things to look forward to when they come home for Christmas.   Country ham and redeye gravy, cheese grits, sausage balls, egg casserole, biscuits and fruit.  It’s a heart attack in the making, but it’s our favorite splurge every year.  Now that they have children and careers, and can’t always be with us on Christmas, they have asked for all their Mom’s recipes and have started cooking the same brunch for their families when they aren’t able to make it home.

“My wife has always told me that as parents, we are in the “memory-making” business. ”

We also felt strongly about being honest with our children.  If we were wrong about something, we admitted it to them.  We tried to always follow through with what we told them we’d do…whether it was a reward, a punishment or a promise.  We wanted them to be able to trust our word, and in return, we wanted to be able to trust theirs.

Parenting is not easy.  Children are going to make mistakes, it’s a part of learning and maturing.  But parents are going to make mistakes too.  Being a parent and being a child are both evolving skills.  But if you can establish an environment where both sides are working toward good things, and there’s love and caring underlying all that you do, then your chances for success are greatly enhanced.  For my wife and I, understanding our role as memory-makers, establishing family traditions to build on, and being consistent and honest in our dealings with our children were the core values to helping us be the best parents we could.

In closing, I thank Eva Nations for asking me to write this article.  It gave me the opportunity to hear my children tell me some of their fond memories from childhood and reminded me once again how lucky I am to have had the opportunity to be a parent.  And now I have five young grandchildren, so this reflection on parenting also reminds me that I want to help create memories and traditions for them too.

Dr. John A. Diddle earned his BS and DDS degrees from the University of Tennessee and his MS in Orthodontics from St. Louis University. He is a board-certified orthodontist who has been practicing for over 30 years. In his spare time, Dr. Diddle enjoys spending time with his family, traveling, playing golf, biking and snow skiing.

How to build an indomitable* spirit

EQ as well as IQ

The Dos And Don’ts Of Sports Parenting