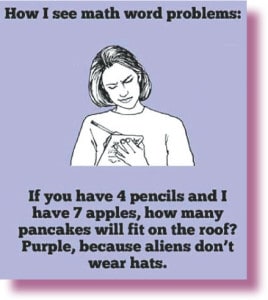 What do engineers do?  Word problems.

What do you do when you’re setting up a budget?  Word problems.

What do you do when you’re planning a road trip?  Word problems.

Word problems are the most important part of a math education.  There would be little reason to learn mathematical symbols, facts, equations and the like if it is not to be connected to our own reality such that we can use it to solve problems in our lives.  Word problems require verbal formulation, then determination of the underlying mathematical relations, and finally the symbolic mathematical expression.  This logical sequence not only ties the student’s math to real life, but helps improve the math ability itself.  For example, it helps the student see that multiplication is simply a way to add quickly by grouping.

One big key to solving word problems is drawing a picture. I didn’t really learn that lesson until I took physics. We would draw what were called “free body diagrams” to understand what was going on in the physical world so we could apply math to figure out what would happen. But pictures help from the very beginning. Here’s an example.

So if Gordon had one bill, Stefan would have two (twice as many):

And if Stefan had two, then Ramone would have four (twice as many again):

Now it is fairly clear that there are seven bills, and we just need to figure out how much each bill is worth. So how many times does seven go into 28? Four times. So they each have a $4 bill! For a younger student we might simply ask “If they each had a $1 bill, how much money would they have altogether? What if they each had a $2 bill?” And et cetera until we reach $28.

I know that this looks all too simple, but you will be amazed at how drawing a picture clarifies a problem!

So don’t be afraid of word problems – we do them all the time! Have fun with them, draw pictures of them, but whatever you do, keep doing those word problems!

Lifelong Memories In The Making