Giving thanks with creativity and awareness 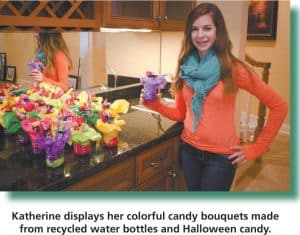 Faced with two dilemmas: How to thank the doctors and nurses and what to do with all those empty water bottles and Halloween candy, Katherine had a creative spark.

Katherine wasn’t able to be with her on the day of the surgical procedure because of school, but she learned from her parents later that day that the operation went well all the attending nurses and physicians at the local hospital had given her grandmother wonderful care. Katherine was relieved and felt grateful for these people at the hospital whom she had never met, but she also felt at a loss for how she might let them know.

At the same time, the issue of recycling came up in family conversation. Katherine is a big fan of bottled water, but her neighborhood does not have a recycling program. It was also just after Halloween, and she had lots of candy that she knew she would never eat (to her parents’ relief!). Faced with two dilemmas: How to thank the doctors and nurses and what to do with all those empty water bottles and Halloween candy, Katherine had a creative spark. Why not make gifts out of the bottles and candy and present them to the hospital staff who gave her grandmother such good care?

Unbeknownst to her parents, she gathered her materials, along with some brightly colored tissue paper, and began to create what she now calls “Bottle Bouquets.” By cutting the bottles in half, fitting the bottom with colored tissue and filling them with the candy, Katherine solved several issues all at once. Her parents were pleasantly surprised to see just how she had channeled her own talent and creativity in such a way as to help so many people at once. Using the bottles and candy helped her family deal with a recycling challenge. The use of the plastic bottles, in its own small way, helped the community manage its recycling and offering the gifts of gratitude to those who worked hard to heal her grandmother helped not only them, but also honored her grandmother in a real and heart-felt way. ”We didn’t realize that she was even thinking about how to thank the hospital staff,” said Paul, Katherine’s father, “So, when she came downstairs with the finished products in her hand, we immediately planned a time to take her to the hospital, so she could present her gifts.”

Sometimes, conditions line up to create a solution that is more than the sum of its parts. When that happens, it is critical to recognize the immensity in seemingly small gestures, so that everyone can benefit from them and learn how to create them as well.

Michael Kull, in addition to co-publishing Knoxville Parent, is a classically trained singer. He has performed with orchestras and choruses around the country and in Europe and maintains a private vocal studio in Knoxville.

No right or wrong

Get Active… With Math?

The Art of Education