An Elixir of Fun 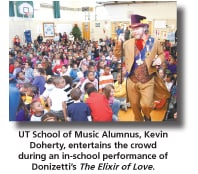 Following the overwhelming success of its previous two seasons’ in-school performances, Knoxville Opera again brought a staged opera into schools this past month.  The performances in English of Donizetti’s romantic comedy The Elixir of Love including costumes, scenery, and props, ran from January 6th – 17th and was a part of Knoxville Opera’s robust annual $150,000 Education/Outreach Program.  “The tremendous response during the past two seasons’ in-school performances of Romeo & Juliette and Cinderella from parents, students and educators has inspired us to continue this endeavor.  We were excited about giving students a taste of the glittering music and comedy of this opera which we are performing this Valentine’s weekend at the magnificent Tennessee Theatre,” said Maestro Salesky.UT School of Music alumni Jennifer D’Agostino and Kevin Doherty performed the roles of Adina, a young farm girl, and Dr. Dulcamara, the quack doctor who sells a love potion to the lovesick Nemorino, portrayed by Texas tenor Sergio Cepeda.  The production, free to Knox County public schools, was accompanied and narrated by Knoxville Opera Maestro Brian Salesky.The performance schedule included presentations at Austin-East, Powell, and L&N STEM high schools; Cedar Bluff, Episcopal, Farragut, Holston, Karns, Lenoir City, Powell, and South Doyle middle schools; and Dogwood, Fountain City, Green Magnet, Karns, Lenoir City, Northshore, Powell, Hardin Valley, and Sarah Moore Greene elementary schools.  An additional show was presented at the Vestal Boys & Girls Club.All students from the East Tennessee Region are invited to attend the Student Dress Rehearsal of the complete fully-staged production of The Elixir of Love on Wednesday, February 12, at 6:30 at the Tennessee Theatre.  This performance is free to all students of all ages.  Doors open at 5:30 with open seating.  Regular performances of The Elixir of Love take place at the Tennessee Theatre on Friday, February 14 at 8:00 p.m. and Sunday, February 16 at 2:30 p.m. For more information, call Knoxville Opera at 865-524-0795 or visit www.KnoxvilleOpera.com.Michael Torano lives in Knoxville and has served as the Director of Marketing and Public Relations for Knoxville Opera for three years. He has worked in marketing and advertising for over 24 years. He is the incoming President of the Knoxville Chapter of the American Advertising Federation and currently serves as a District coordinator of conferences and conventions for the AAF 7th District covering Tennessee, Alabama, Georgia, Louisiana, and Mississippi.

Why Do Teenagers Have to Take the ACT or SAT?

The Independent Child: Tips On How To Teach Your Child To Be Self-Reliant