Home > Education > Figuring How To Get There From Here
Education

Figuring How To Get There From Here 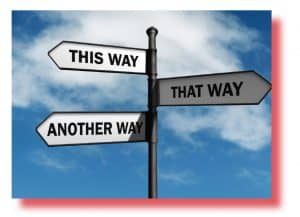 Have you ever tried to wrap your head around something that just doesn’t seem possible, but it is?  I remember a couple of summers ago fighting with what’s referred to as “The Monty Hall Problem” until it seemed like I was going to go nuts.  Since I don’t want you to go nuts, I won’t go into it here. Maybe in the future, I’ll feel a little less magnanimous and tell you anyway.

What if I told you that no, you can’t fit your feeler gauge between 0.999… and 1 because 0.999… = 1?  We got there!  “That’s not possible!” you cry.  Okay, I’ll admit that I felt the same way, and because I’m such a sweetheart I’m not going to just say it and leave you to figure it out.  Actually, there are multiple ways to show this to be true, but I’ll stick with the ones that are simplest and don’t require knowledge of high-level math.  (I’m not trying to “dumb anything down,” mind you.  It’s just that I prefer the simplest way to get somewhere myself!)

Think for a minute about 1/3.  To write this as a decimal fraction you would write 0.333…  Yes, the threes go on forever.  Now let’s add up three of them:

On this one, we will start with the statement that something is equal to our nasty little mystery number like this:  x = 0.999…, then use some simple algebra to figure out what is equal to it.  We’ll multiply the whole equation by ten, then subtract the initial equation from that.  Looks like this:

Now I know you’re saying, “but if you multiply a number by ten, then there would be a zero at the end of it!”  But in this case there isn’t, because the nines go on forever, so all the multiplying does is move the decimal place.

The bottom line is that if you have 0.9999 etc with a finite (limited) number of nines, you’ll get really, really close to 1 without hitting it, but if the nines never stop, you’re there.  Turns out you can get there from here!

Running Towards A Healthful Lifestyle

The wisdom behind wisdom teeth: part 1

What Does It Take To Educate A Child Now-A-Days?