An Interview With Author Vince Vawter 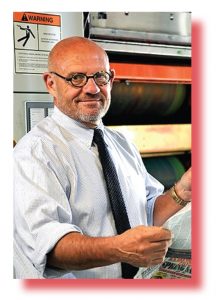 “A lot of this book was memoir,” Vince Vawter told us over lunch at Panera. My son, Wyatt, and I wanted to talk to him about his intriguing book Paperboy. Wyatt, a rising 7th grader at Sacred Heart, had been assigned the book for his summer reading. Vince has stuttered since he was five. He told us that he had taken over his friend’s paper route one summer in Memphis. He did have, at one point, a housekeeper who took him to bars on Beale Street and let him drink milk while she drank and danced. He did know a junk man like Ara T., although the real Ara T. met a different fate than that in his book. Finally, he was 55 years old when he learned that his father was not his biological father.

Mr. Spiro is the only created major character in the book. “He’s the mentor I wish I had,” Vince said. His editor had suggested, “He’s you at 65”, an observation that Vince seemed to acknowledge. My son, Wyatt, asked him what the four parts of the dollar bill and the four words represented that Mr. Spiro gives to Little Man. “It’s the quartering of the soul,” Vince said, with the idea that each self has at least four parts that need to be integrated to have a happy life.

Vince has given many talks about Paperboy to schools across the country. “I’ve learned a lot about myself by talking about the novel.” He related an interesting dialogue at one middle school. A young girl asked him, “Would you have written the book if you didn’t stutter?” He said, “No, probably not.” She replied, “Then you’re glad that you stuttered.” Vince said, “You’re right.”

Vince has also given many talks about his experiences of stuttering. His essay, “Notes from a Stuttering ‘Expert’”, offers cogent advice to children, adolescents, adults, parents, and speech clinicians about how to accept and deal with stuttering. “Although I’m removed by five decades from the heartbreak that is associated with an adolescent stutter, the scars run deep.”

Vince wanted to be a professional baseball player. He played at LSU for a year and then at Rhodes College in Memphis for two years. When he realized he was not going to make the major leagues, he pursued sports writing and journalism, first at the University of Memphis and then at the University of Tennessee. He worked at the Memphis Press Scimitar from 1970 to 1983, then as Managing Editor at the Knoxville News-Sentinel from 1985 to 1995, and finally as Editor and Publisher at the Evansville Courier-Journal until his retirement.

His essay, “Notes from a Stuttering ‘Expert’”, offers cogent advice to children, adolescents, adults, parents, and speech clinicians about how to accept and deal with stuttering.

Although Vince, along with his wife, has retired to a farm in Louisville, he is busy writing another book. He has also written a screenplay for Paperboy. As we finished lunch, Vince offered to autograph Wyatt’s copy of his book.  As we said goodbye, Wyatt and I both felt that it was a great pleasure to meet the real Paperboy.

Note: Vince Vawter will give a presentation on September 16, 2015, at Sacred Heart School in Knoxville.

How can I help my teenager with middle and high school math?

Go out, and visit colleges!

An Event You Can Count On

What Children Can Learn From Adopting A Shelter Pet