Home > Education > An Event You Can Count On
Education

An Event You Can Count On 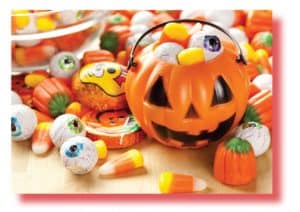 I used to travel quite a bit for business but always tried to be home for holidays, and Halloween was one that I never wanted to miss.  I loved walking my kids around the neighborhood to build a candy stash that was mountainous.  I will also have to admit to having levied what I called a “dad tax”. I got to loot the stash with impunity for having provided protective service on the T-or-T route.

The candy lends itself to more uses, however, than just the accelerated need for a dentist.  You can count it, sure, but why not learn a little math?  Have your little princess or pirate lay them out in groups of ten with one final group of ones when you don’t have a final group of ten.  If she has five groups of ten and four left over, you can show that the five tens is fifty, and when you write the number the five comes first because it shows how many tens there were, and it’s followed by the four extras – 54.  The thing is, young kids can recite the tens (ten, twenty, thirty, forty, etc.), but still not connect that to actual counting.  So a simple exercise like this helps cement that concept.

For your older kids we’ll amp up the math, though.  How about divisibility rules?  Let’s start with the same amount of 54 pieces.  Now 54 is divisible by 2 because it’s an even number, and it’s divisible by 3 because the digits add up to 9 which is divisible by 3.  But it’s not divisible by 4 because 52 is, and 4 only goes into every other even number.  So tell your child she can eat only enough pieces to get to the next lower multiple of 4.  She gets two pieces!

The thing is, young kids can recite the tens (ten, twenty, thirty, forty, etc.), but still not connect that to actual counting.

We don’t have a fancy trick to determine multiples of 7 but we’re at a manageable number, so she can eat enough to get down to the next multiple of 7, which is 49.  Fives are easy, right, since it’s a multiple of 5 if it ends with a 5 or a 0, so this time she gets 4 pieces and loves you for that one.  So now you’re at 45.

Now if you can think of a more fun way to learn and practice math than eating candy, you should be in the teaching business!

The Value of Serving Others

Should My Child Learn To Play A Musical Instrument?

The Law Of SAMEness