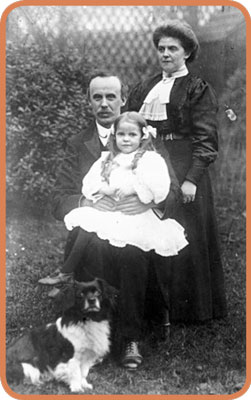 The reverend John Harper, his 6 year old daugter Nana, and Jessie Leitch. All were aboard the Titanic, but only Nana and Miss Leitch survived.

Throughout our lifetime, each one of us is likely to make a decision that, in that moment, feels like a matter of life or death. While most of these decisions will fall short of a true mortal dilemma, the time may come for any one of us to be faced with such a choice.

Through historical and personal accounts of those people who have been faced with a true life or death moment, we can see how we, as a human race, are capable of responding and, hopefully, learn something from their experience. The following from the archived stories of passengers aboard the ill-fated Titanic is one example:

One hundred years have passed since Titanic’s first and only voyage.  Yet, even now, what we’re told about her crew and passengers—especially the children—often begins with the moment they stepped aboard ship.  Truth is, most of their lives began long before Titanic.  Each life’s story was unique:  Some were complicated, others surprising, but all were inspiring and full of hope.

The Reverend John Harper’s was just that.  Born to devout Baptists in the Scottish village of Houston, John was drawn to the church and its teachings at an early age.  He preached the gospel as a teenager on village street corners.  He believed our souls’ life mission is preordained, and that his was to serve God and help others.

Along Harper’s pilgrimage of faith, he married and became a father, a church pastor and, sadly, a young widower.  Invited to preside over a series of revival services in Chicago, he boarded Titanic with his beloved 6-year-old daughter, Nan, and her Aunt Jessie.  Before they sailed, a parishioner warned Rev. Harper the voyage would end badly, but he replied his destiny was to sail Titanic.  Whatever happened would be God’s will.

At about midnight Tuesday, April 14, 1912, Titanic struck an iceberg.  Rev. Harper’s faith was about to be tested as never before.  When it appeared the ship was sinking, Rev. Harper reportedly rushed Nan and Jessie to the lifeboats.  He tearfully knelt down to kiss his daughter, knowing she soon might be an orphan.  As flares lit the dark sky, Rev. Harper turned to the panicking crowd and shouted, “Women, children and unsaved people into the lifeboats!”

More than 1,500 people sank below the frigid waters that night, Reverend Harper among them, but not before giving his lifebelt to a non-believer.  “I won’t need this,” he said, “because I’m not going down, I’m going up!”

In the water he swam to a young man who was nearing shock.  Between breaths, he asked, “Are you saved?”  The lad shook his head and drifted off.  When the current pulled him back, the reverend asked, “Are you saved yet?”  The young man said he couldn’t say.  Rev. Harper pleaded, “Believe in the Lord Jesus Christ and thou shalt be saved,” then slipped into his watery grave.

Of the six survivors pulled from the water that night, one was the lad whom Rev. Harper directed his last words.  With two miles of water beneath him, the young man had decided to become a believer.

No right or wrong

Mathing With Your Child

Creative ways to integrate math in your child’s daily life