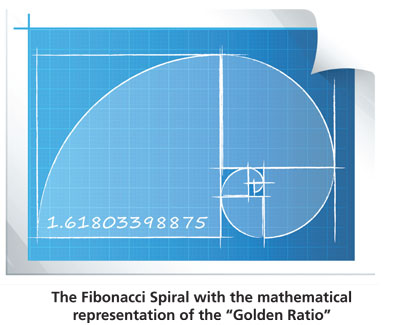 My first career was music.  Now, I teach math.  You can imagine, then, how often I hear, “I’ve heard that math and music have a lot in common,” generally spoken with a perplexed expression.  I can understand the bewilderment, though.  The only math in music that is obvious to most people is rather elementary – half notes, sixteenth notes, 4:4 time, 3:4 time, etc.  But at its root, music is not only related to math, it’s all about math.  Music is sound, sound is physics, and physics is very much a mathematical expression of the world around us.

True enough, but this doesn’t seem to me to answer the question about whether math and the arts are somehow connected in the artistic sense.  Let’s think about this for a minute.

Leonardo Pisano Bigollo, a 13th-century mathematician better known as Fibonacci, has a series of numbers named after him: The Fibonacci Sequence.  Each term in the sequence is determined by adding the two previous terms – 1, 2, 3, 5, 8, 13, 21, etc.  (Modern mathematicians start with 0, 1, 1, 2, 3, 5, etc.)  The series itself is interesting, but it also gives rise to what is called the golden ratio (or golden mean, approximately 1.618, which you get when you divide one Fibonacci number by the one just before it starting at about 34 or so) and the golden angle (that mathematicians prefer to call Phi, about 137.5 degrees).  Both of these have been linked to human perception of beauty.

“That beautiful rose grew its pedals using the golden angle to spiral them around its center such that each new pedal doesn’t block the sun from the ones below.”

Look at any number of living things in nature and you’ll find the golden angle and Fibonacci numbers: some sea shells, pineapples, cauliflower, pine cones, and many flowers.  That beautiful rose grew its pedals using the golden angle to spiral them around its center such that each new pedal doesn’t block the sun from the ones below.  If so many things in nature are associated with the Fibonacci numbers, it is not surprising to see the influence of the Fibonacci numbers in art, from fine art to architecture to music.

Does this mean that these artists intentionally used Fibonacci numbers in their works?  Not necessarily.  But, since da Vinci referred to it as the “divine proportion” rather than the golden ratio, that might be a clue in his case.  The point is not about their intentions so much as their works – the reflection of beauty that can be described mathematically.

In the end, I guess it isn’t so hard to understand that there is a strong, if subtle, link between math and the arts.  Mathematics is used to describe the world around us, beauty is in the world, so math can describe beauty.  When people make beautiful works of art, in many cases, math will be able to describe that beauty.

In light of this, perhaps the better question is how math could not be related to the arts!

Creative ways to integrate math in your child’s daily life

An Update From Knox County Schools

Do You Know What Your Kids Are Downloading?