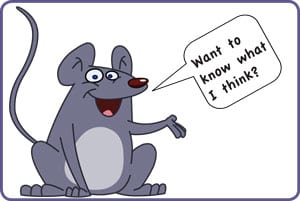 One evening, my wife asked me and my oldest son a question about space exploration. Spontaneously, we both replied with exactly with the same answer. Smiling, we looked at each other and repeated a common proverb. My youngest son stared at us and said, “What? Gray Mice Think Alike?” We laughed because the proverb was “Great Minds Think Alike”. My youngest son had misheard us, but his mind changed the phrase to what he thought he heard. As we left him, he was still puzzling over what gray mice think about.

We often change unknown information to what we know. This is a natural process of the mind. For instance, we can often fill in the gaps in the dropped signals of cell phone calls by inferring what a person most likely said. A more interesting example of this phenomenon, however, is called confirmation bias. We use confirmation bias when we seek out evidence to support our beliefs and theories (and ignore evidence that doesn’t support it). Or confirmation bias can occur when we interpret ambiguous evidence as supporting our position.

“Good teachers can help students develop analytic skills that evaluate evidence on both sides of an argument, whether that argument is in science, history, math, or psychology. ”

My wife and I often disagree about what movies to watch. I wanted to see The Avengers; she didn’t. I quoted her part of the New York Times review of the movie: “The Avengers is not without its pleasures. Written and directed by Joss Whedon, this movie revels in the individuality of its mighty, mythical characters…The best scenes are not the overblown, skull-assaulting action sequences but the moments in between, when the assembled heroes have the opportunity to brag, banter, flirt and bicker.” “See,” I said, “this critic notes the pleasures of this movie and the great characters.” “Look,” my wife said, “he also says it’s ‘overblown and skull-assaulting’.” “But,” I said, “You liked Thor.” “Yes,” she replied, “but I hated Battleship.”

We could go on for hours. I would marshal evidence that supports my position, while she could equally bring to bear evidence that supports her. This example may seem trivial because there is no “objective” truth about whether The Avengers is a good movie. It’s her opinion against mine. But there are numerous examples in which confirmation bias has had a tremendous impact.

Consider Galileo. With his newly invented telescope, Galileo could easily provide evidence for sunspots, moons of Jupiter, and the phases of Venus. Galileo marshaled these discoveries and other evidence to support a heliocentric view of the solar system, in which the Earth revolves around the Sun. Many religious and political leaders discounted Galileo’s views and suggested that the evidence really still supported the notion that the Sun revolves around the Earth.  Galileo was astounded and wrote to his friend Kepler: “My dear Kepler, what would you say of the learned here who have steadfastly refused to cast a glance through the telescope?  What shall we make of this?  Shall we laugh, or shall we cry?”

Or think about Thomas Edison. As everyone knows, Edison is credited with hundreds of inventions that transformed our lives. Edison also was an early advocate of direct current (DC) to supply electricity to homes and businesses. Another scientist, Nikola Tesla, showed that alternating current (AC) was more practical, efficient, and could deliver electricity over longer distances than DC. Edison didn’t believe it. He waged an advertising and scientific war against AC, a battle he eventually lost.

Confirmation bias is a perfect example of why we need good teachers. It’s extremely difficult to examine, objectively, evidence that doesn’t support our point of view. Good teachers can help students develop analytic skills that evaluate evidence on both sides of an argument, whether that argument is in science, history, math, or psychology. The new Common Core Standards emphasize comprehension similar skills in speaking and listening. For instance, a Grade 8 student should be able to “Delineate a speaker’s argument and specific claims, evaluating the soundness of the reasoning and relevance and sufficiency of the evidence and identifying when irrelevant evidence is introduced.”

Whether “Great Minds” or “Gray Mice” think alike is not always a good thing, especially if both are only using evidence that supports their viewpoints and discounting other evidence. Maybe it would be better if the “Gray Mice” got together to argue with each other.

Michael K. Smith, Ph.D., is owner of TESTPREP EXPERTS (www.testprepexperts.com) which prepares students for standardized tests such as the ACT and SAT. He is also a consultant to Discovery Education Assessment.

Educate Don’t Discriminate: What The Pit Bull Can Teach Us

Do You Know What Your Kids Are Downloading?

What Children Can Learn From Adopting A Shelter Pet

Local is good, healthy, and fun!