A Life-Saving Decision For Animals 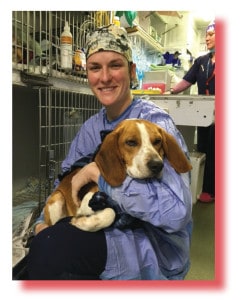 Pet owners face many day-to-day decisions that affect the health and welfare of the animals they love. What kind of food is best? How much food? What kind of exercise will be most beneficial? However, the most important decision pet owners face affects not only the pet, but the community as well.

The decision to spay/neuter is the most humane way to control animal overpopulation. Since July 2007, Young-Williams Animal Center has provided more than 50,000 low-cost spay and neuter surgeries for the general public. This was made possible in the beginning by a five-year grant from the Aslan Foundation whose goal was to reduce euthanasia in the shelter through the use of the mobile Spay Shuttle program.  Because of the high demand for this service, Young-Williams added a stationary spay/neuter clinic to the program in January 2012.

Besides not being able to reproduce, the benefits of spay/neuter surgeries are many.  The surgeries prevent ovarian or uterine cancer and prevent uterine infections in females, and both sexes are less likely to fight with other animals. Neutered males are less likely to mark territory by urinating, will not get testicular tumors, will have less prostate inflammation, and will exhibit less inappropriate sexual behavior.

Just as the benefits of spay/neuter are many, the myths about the surgeries are plentiful. Animals do not become fat and lazy after being altered.  While it is true that an animal’s metabolism may slow after a spay/neuter surgery, monitoring food intake and adjusting as needed can counter the slower metabolism.

Altered dogs will not become passive when it comes to being protective of their surroundings. They will remain instinctually territorial and protective of their owners’ homes. The only behaviors that will change are those controlled by the sex hormones.

Jeff Ashin is the CEO of Young-Williams Animal Center, a 501 (c)(3) not-for-profit animal welfare organization and the official shelter for Knoxville and Knox County. The center offers pet adoption at two locations and affordable spay/neuter solutions. For more information call 865-215-6599 or visit www.young-williams.org