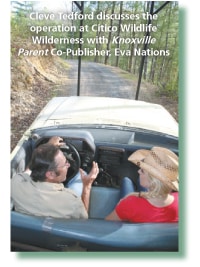 The Citico Wildlife Wilderness is just  a short drive from Knoxville, and yet, it is a destination that feels worlds away from the familiar skyline most of us enjoy. This unique wildlife preserve is nestled in the bosom of the Cherokee National Forest, far from city lights, traffic noise and amenities like electricity and cellular service. It is a world unto itself, an enchanted place protected by a specially constructed fence designed to contain the wildlife within, as it protects them from the predators (coyote and bear, mostly) lurking just outside.There are no identifying signs or landmarks leading to its gates. In fact, only after booking a tour (It’s actually more like a safari), does one receive instructions on how to get there. Once inside the first gate, which leads into the Cherokee National Forest, one is met by owner, host and tour guide, Cleve Tedford, a passionate naturalist and expert on subjects ranging from environmental concerns like watershed management: erosion prevention and groundwater filtration to protect endangered species, to animal science. Tedford has spent a career traveling the world studying various species of indigenous wildlife. His expertise in working with deer and elk has made him a frequent consultant to organizations like the University of Tennessee, the National Wildlife Research Center in Ft. Collins, Colorado and the Great Smoky Mountains National Park.

In speaking with Tedford during a guided tour (safari) at his preserve, it is clear that this land has always been a magnet, his true north, the place where he was destined to finally settle. Little did anyone realize that Tedford would not only bring his years of experience and knowledge back as fond memories and observations. Tedford has literally brought his work home with him in the form of the 25 different species of animals from all over the world (some endangered) that freely roam the 100 acre preserve.Tours can accommodate up to 40 people in an open air 4-wheel drive vehicle, a kind of mountain Jeepney with an elevated canopy replacing the standard windshield, side windows and roof. the terrain is rough and, in places, narrow, and the only other way to traverse it would be on horseback (or on the back of a Yak – more on that later). While there are one or two species that require pens for their own protection, the majority of animals have no such restrictions, and one may cross your path at any moment. This was exactly the case from the moment we entered the gated preserve. As we approached a small lake, we spied two Pere David’s Deer grazing along the quiet bank. These deer, also called milu, are considered extinct in the wild, and so, only live in captivity. They were introduced to the West by a French missionary working in China called Pere David, the animal’s namesake, in the 1860’s. It’s antlers are impressive, easily spanning several feet above its head, and by Tedford’s estimate, one of the deer here easily holds the world record for the size of his antlers.Further up the road, we came across a menagerie straight out of Doctor Dolittle (the 1967 Rex Harrison version, if you please). Whereas the Pere David’s Deer might resemble your run-of-the-mill elk or perhaps a 10 point buck if you were to catch a glimpse out of the corner of your eye, the site of Banteng from Southeast Asia, African Watusi and a Sicilian donkey all gathered together in one place was visually arresting and even a bit disorienting. We realized that we were no longer in Appalachia but in a geographic reality springing from the curious mind of Cleve Tedford. The Ankole-Watusi is impressive, because of its massive horns that extend some four feet from its head in a lazy upward curve. This one was even more fantastic, because its horns never found that upward curve and, instead, jutted out on either side like the wings of a Piper Cub. “They use their horns mostly to challenge other males during mating season or to protect themselves against predators,” says Tedford, “but I’ve lost several side view mirrors to this one.”

Standing alongside the Watusi was his unlikely sidekick, a Sicilian donkey (The movie Shrek immediately came to mind). This donkey is perfectly proportioned, maybe three feet tall and carries itself with a six foot attitude. It spent its time chasing the Banteng away from the Watusi, braying with a sound that echoed throughout the valley below. Then, as if this weren’t enough of a challenge to our newly expanding reality, up walked a French Plateau donkey, with ears almost as long as the Sicilian donkey was tall, and then, to complete this surreal tableau, a zebra appeared! “I don’t keep any predatory animals in the preserve, so they all get along pretty well. Some of the animals keep to themselves, and others, like these here, seem to like being with each other,” says Tedford.A bit further down the trail, we came to a widening stretch, where horse trainer turned yak trainer, Rayna Granger, and her daughter, Shannon, were saddling up two yaks. “They are very gentle as long as you approach them gently,” says Rayna. She has taken her knowledge of horses and applied that to the yaks with great success. “The yak,” according to Tedford, “is truly the world’s most versatile animal.” Used as transportation, worker, sport animal, food, clothing, fuel, building material, there is no part of this animal that hasn’t proven useful for human survival. Celeste Miller, Vet Tech and U.T. graduate in Animal Services, was assisting the pair. Celeste functions as Tedford’s right hand support, the two communicating via two-way radio all day across the 100 acre expanse. 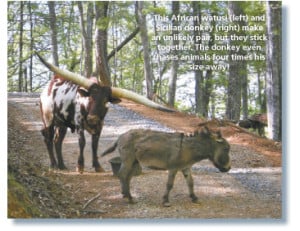 After the lesson in the proper way to ride a yak, we proceeded along the trail, encountering Patagonia Cavy, Barbary Sheep, Capybara (the world’s largest member of the rodent family), Axis deer, Indonesian Anoa, and Emu, all along the winding, climbing trails until we reached the Information Center, which also serves as a watering hole for humans and has a quaint little gift shop. Here, there is a large penned area with Silky Fainting goats, Chinese Muntjac deer and a Wallaroo (entomologically a mash up of Kangaroo and Wallaby, though, in fact, its own distinct species). It’s here that the tour (safari) ends, but with time enough to freshen up, pet the goats and even feed the Muntjac, and prepare for re-entry into civilization.It is difficult to describe the feeling of being driven out of the gate and back down the trail to the car other than to say it’s like waking from a particularly exotic and colorful dream only to be back in the slightly monochromatic reality that was left only a couple of hours before. Driving back to Knoxville amongst all the traffic and houses and shops, the only thought echoing was, “Two hours wasn’t nearly long enough. When can we schedule a time to go back?”

Michael Kull, in addition to co-publishing Knoxville Parent, is a classically trained singer. He has performed with orchestras and choruses around the country and in Europe and maintains a private vocal studio in Knoxville.

Get Outside, Get Fit, Get Active...

The Art of Teaching

Help Protect Yourself And The Ones You Love From The Flu

Getting The Most Out Of Practice: Part II

Getting Ready for The New School Year: The Do’s and the Don’ts