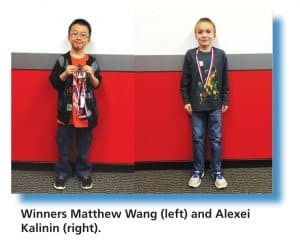 On October 17th, 2015, we had the chance to attend Mathnasmium’s 5th Annual TriMathalon, hosted for the first time here in Knoxville. The contestants ranged from 43 second to fifth graders all from local Knox County Schools as well as a few private area schools. The competition consisted of three mathematical challenges: The Counting Game, Magic Squares, and Mental Math. It was a welcoming sight to see such gifted minds gather together for a day of friendly math competition, fun games, prizes, and pizza. During our time at TriMathalon, we were able to mingle with some of the winning contestants and Mike O’Hern, the Center Director of Mathnasium of West Knoxville and fellow Knoxville Parent contributor.

First, we spoke with 3rd grader, Matthew Wang, who was proudly sporting his 3rd place medal. Matthew mentioned that this was his first time doing a math competition and he was really enjoying himself. His favorite portion of the test was Magic Squares, which requires the participant to complete mathematical problems using a number bank consisting of 25 numbers to choose from (an example problem: ___ x ___ = 8). It was a real pleasure to meet with Matthew and his mother, and we wish him the best of luck in future math competitions.

After interviewing Matthew, we met with our good friend Mike O’Hern during the intermission. Mike thoroughly described to us what each section of the test comprised of, and he explained that in each section the degree of difficulty increases near the end of each exercise. As an example, let’s say a 2nd grader is solving math problems for the Mental Math exercise. At the beginning of the section, the child is solving problems at his or her grade level. As they progress, the difficulty increases a grade level or two above the participant’s expected capability. Mike was truly proud of all the students that were able to attend and make the first TriMathalon such a hit.  Mike did an excellent job hosting; parents and children alike really seemed to cherish his upbeat and welcoming personality.

Later that day we were able to have our final interview with 2nd grader, Alexei Kalinin. Alexei received a perfect score on the TriMathalon test! Not an easy feat. This achievement landed him 1st place locally. He had the opportunity to compete with other children that also received a perfect score in a national tiebreaker, and he won 3rd place overall! Alexei received a $50 Regal Cinema gift card and medal for his local performance at TriMathalon. For his national success he received a 3rd-place trophy, a 3-month scholarship to Mathnasium, and a Rubik’s Cube Prize Pack. When we asked what his key to success was, Alexei casually recalled, “I didn’t do that much to prepare, but I made sure to do the practice sheets.” In Alexei’s case, working smarter not harder produces results.

In keeping with this month’s theme “Giving Thanks”, we are very grateful to have a generous program like Mathnasium that is dedicated to educating the children of Knoxville and encouraging them to achieve their goals. As an effort to help outside of their learning centers, Mathnasium donated $37,000 to local schools across the nation, and our very own Mathnasium of West Knoxville donated $500 to the school that had the most participants (Farragut Intermediate School). That’s not all! Since St. John Neumann had only one less participant, Mathnasium decided to donate $250 to them as a runner-up prize.

It was uplifting to see so many local parents supporting their children. We wish all of our readers a Happy Thanksgiving!

An Important Discussion About Suicide

Should My Child Major In Music: Part I

Getting The Most Out Of Practice – Chapter Three: Why Read Music? Part I