Home > Education > To bee or not to bee: Allergic to insects?
Education

To bee or not to bee: Allergic to insects? 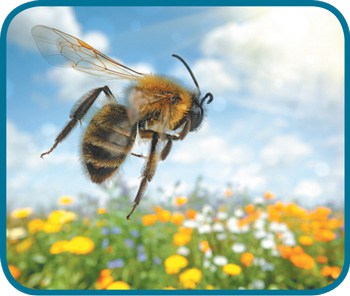 School is out, and we all enjoy time outdoors with our families. Unfortunately, this increases one’s chances of being stung by flying insects or ants.

Although there are over 16,000 species of stinging insects of the order Hymenoptera, only less than 1% are responsible for all insect stings. These belong to the family of honey bees (Apidae), yellow jackets and hornets (Vespidae), wasps (Hypenoptera) and fire ants (Formicidae family). Only the females of each of these species have stingers and only honey bees leave stingers in the skin. Most insects sting to defend themselves, so it is always best not to disturb their peace. The most aggressive insects are yellow jackets, which build nests in the ground and in various structures. In addition, yellow jackets feed in trash and picnic areas, so watch out!

The majority of first stings by an insect cause only minor local reactions with local swelling, redness and itching. Cleaning the affected area with cold compress and using oral or topical antihistamines (such as Benadryl) should promptly resolve discomfort. Frequent and multiple stings by the same type of insects increase the chances of developing systemic reactions.

Systemic reactions not only involve local swelling and itching of skin, but also other parts of your body are affected with symptoms: chest tightness, coughing, wheezing, dizziness, weakness, nausea, diarrhea, and even loss of consciousness. These are almost always a sign of allergy sensitization and production of allergic IgE antibody.

Since each type of insect has very specific venom allergens, you may be stung by one out of the five with a severe reaction, but the remaining four types of insects might only produce minor and local skin reaction.

People who experience faster systemic reactions tend to have more severe symptoms. Once you have one systemic reaction from an insect sting, consecutive stings by the same insect type will tend to progress rapidly to full anaphylaxis (leading to loss of consciousness and even possibly death).  Unfortunately, at least 50 deaths per year occur in the United States and are more frequent in the south.

Overall up to 3% of adults and 1% children (people younger than 17 years) develop systemic reactions upon repeated stings. This allergy is twice as frequent in boys as it is in girls. There is no clear association of insect allergies with other allergies to pollen, dusts, animals, etc. Additionally, between family members, there is no correlation of having insect venom allergies. Therefore, we are all at about the same risk.

Everyone should protect himself against insect stings. You should be specifically careful when mowing the lawn, gardening, working with trash or eating and drinking outdoors. Yellow jackets can hide in an open can of your favorite flavored drink. Keep in mind that consecutive stings increase the chances of severe reactions, especially when caused by insects of the same family.

If you have a large local reaction or see progression of your reactivity, you need to seek professional advice from your physician.

“EpiPen” or the newer “Auvi-Q” – self injectable epinephrine – is unfortunately not the solution to effectively treat severe insect stings. Why not, despite the fact that these are so widely prescribed?

First, think how often you may not have your small pen or pencil available within reach when you need it! Also, how often does your pen not even work? Second, the epinephrine injection may slow down or arrest your reaction for 15-30 minutes, but then the effect may dissipate and you may need an additional injection (yes, you should have TWO epinephrine injectors). Some people still develop delayed reactions from an insect sting up to two and four hours after the incident.

So, after a severe sting reaction, even if you give yourself one or two epinephrine injections, you need to go promptly to the emergency room. Getting to an emergency room is easier said than done if you are in the woods or in a remote area, or if you have to drive the car yourself, which is not recommended. In addition, epinephrine injections are contra indicated in individuals with coronary-vascular disease.

Therefore, the only truly effective solution to severe insect reaction is allergy immunization to selective insect venom. This treatment requires assessment by a physician specialized in allergy and immunology. The physician will perform a specific skin test to determine which insect venoms are problematic and then design a specific immunotherapy program for you.

Immunotherapy to insect venom is almost 100% effective. Within three months of treatment you would be fully protected against systemic anaphylactic reaction. Initially, you will need weekly treatment until your remission, typically three months. You would follow with every four to six week treatments thereafter for up to an average of five years. At that time, you will be retested. If your skin test is negative, as it should be, then you may have protection from a specific venom allergy for life. Some people, like professional golfers and tennis players need protection immediately (rather than over a three month period) and this can be achieved by something called rapid desensitization procedure. This procedure protects someone within six to eight hours.

Do not play proverbial “Russian Roulette” with insect stings. You don’t have to be hiking in the mountains or woods or be on a picnic to be stung. My last insect sting was at K-Mart while waiting to pay my bill!

Marek M. Pienkowski, M.D., Ph.D. was educated in clinical immunology at Johns Hopkins School of Medicine in Baltimore and internal medicine at Henry Ford Hospital in Detroit. Dr. Pienkowski has been serving patients in East Tennessee with allergies, asthma and immunological disorders for nearly 30 years through Allergic Diseases, Asthma & Immunology Clinic, P.C.. Active both in biomedical research and academia, he has published more than sixty scientific papers as well as two books.

Child safety starts with you